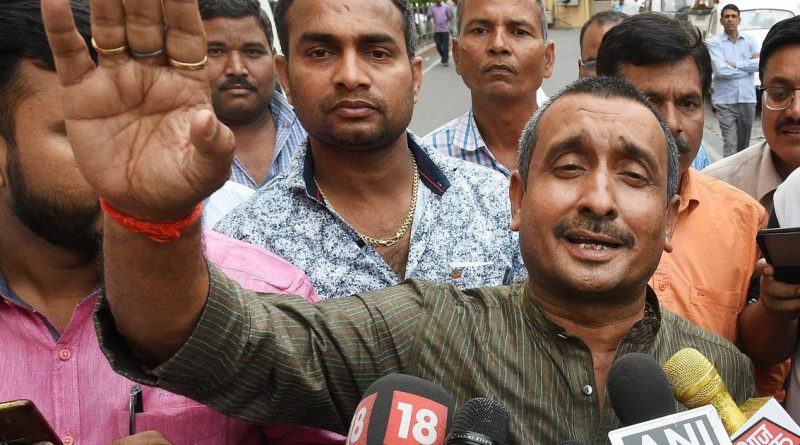 A Delhi Court on Friday sentenced all convicts, including expelled BJP MLA Kuldeep Singh Sengar to ten years imprisonment for the death of the father of the Unnao rape survivor. Sengar (currently in Tihar jail serving life sentence in the rape case), and his brother Atul Sengar have also been asked to pay Rs 10 lakh each as compensation to the victims’s family. District judge Dharmesh Sharma of the Tis Hazari Court had last week held Sengar, along with six others, guilty of culpable homicide not amounting to murder. At the sentencing hearing today, all of them have been sentenced to 10 years imprisonment under section 304 IPC and 5 years imprisonment for criminal conspiracy under Section 120B of IPC.

The court found that Sengar did not intend to kill the victim’s father. However, he was beaten so brutally that he succumbed to death. The rape victim’s father was allegedly framed in an illegal arms case and arrested on April 3, 2018. He died while in judicial custody a few days later, on April 9, 2018. The trial in the case was fast-tracked after being transferred to Delhi from UP on orders from Supreme Court.

Notably, Sengar has already been found guilty in the rape case and has been sentenced till the end of life on December 20, 2019. That order of conviction was also passed by District judge Dharmesh Sharma who had clarified that life imprisonment will mean “imprisonment for the remainder of his natural or biological life” in terms of Section 376(2) of IPC. Sengar is also facing another trial for alleged criminal conspiracy behind the road crash which resulted in the killing of two aunts of the rape survivor, and also in indicting grave injuries to her and her lawyer. The incident occurred near Ray Barely on July 29 last year, when a truck rammed into the car in which they were travelling.