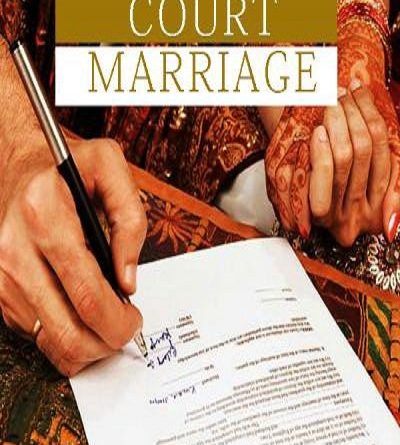 In India, court marriages are solemnised by the Marriage Act of 1954. Under the law, a court marriage can perform between a man and a woman who are over the age of 21 and 18 respectively. The parties can be of Indian or foreign descent. There are other conditions such as; either should not be in an existing marriage with another person and that both parties should be of sound mind.

A court marriage does away with rituals and ceremonies and is simple. It is performed by the Marriage Registrar and upon completion; the participants are given a marriage certificate stating that their union is legal in the eyes of the law.

Court marriages are gaining popularity in India; many couples are opting for it. There are numerous reasons why court marriages are the preferred choice these days. One of the reasons is that couples want to keep their marriage economical and simple. Other reasons are because of inter-caste marriages, or marriages without the blessings of the families. Whatever be the case, court marriage is not simple; there are a lot of procedures involved and costs.

Steps for court marriage in India?

The officer of the district will display the notice at a prominent place at his office for 30 days. Within this period, anyone can object to the marriage if it is deemed illegal under the Act and the eligibility conditions. If there is no valid objection, the officer and perform the marriage without any hassle.

The bride, groom and three witnesses need to sign a declaring form in the presence of the officer or at a location that is reasonably close to the registrar’s office.

One all the formalities are completed, the marriage party and the witnesses need to sign the marriage certificate. It will be ready within 15 to 30 days.

What are the documents needed for a court marriage?

Just like with any legal procedure, one would need to furnish documents when applying for a court marriage. The following documents are required:

How Much Are Court Marriage Registration Fees In India?

The general fees for application are Rs.100 under the Hindu Marriage Act and Rs.150 under the Special Marriage Act. Apart from this, there are a few administrative and other charges that you may have to incur.

How Much Do Court Marriage Lawyers Charge In India?

This would depend on the type of case. A straightforward case is cheaper, obviously. However, if the case is complicated, say a divorce case, the lawyers may charge you a bit more. In the latter case, lawyers will charge for their opinion apart from their legal fees.

What Are The Court Marriage Laws In India?

The provisions of the court marriage laws in India come under the Special Marriage Act, 1954. The main part of this law states that a person can marry someone of the opposite sex if the man is above 21 years and the woman above 18 years.

The marriage law is of two types one is the Hindu Marriage Act which is used when both parties are Hindus. For inter-caste marriages, marriage is conducted under the Special Marriage Act.